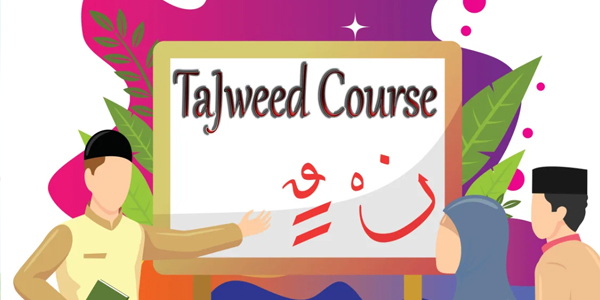 To be a good and virtuous person in the world, we need the guidance of the Qur’an

It is important for every Muslim to recite the Qur’an, understand it and follow it.

The Holy Qur’an is an important part of our lives that guides us in how we can live in this world as a good, virtuous and beloved person of Allah.
As it is necessary to read the Quran. Similarly, it is necessary to recite the Quran with “Tajweed” (proper pronunciation).
As Allah Almighty says in Quran: And recite the Quran clearly with trail (is distinct and measured tone).
And it is only possible that we read it with proper tajweed.

To pronounce the arabic alphabets properly with their “Makharij”(pronunciation place) is called Tajweed.
In Tajweed we also learn the rules by which we read the Qur’an beautifully.

Why is it important to learn Tajweed?

If the rules of Tajweed are not followed, the recitation of the Qur’an does not have beauty and sweetness, but sometimes the meaning of the words also changes. And sometimes the words of disbelief are uttered unknowingly.

It is important to learn the rules of Tajweed so that no complications remain in the mind during the recitation. And whenever we read a word and find out why the words are coming together, why the positions of the letters change.
There are some rules of Tajweed which, if not observed, change the meaning of the words. There are some letters of the Arabic language which are read in bold and there are some which are not made bold, and which letters If they are not paid correctly, sometimes the meaning changes.

For example, the Quranic word “قلب“means “Heart”. In this word, the letter “ق” is read in bold. If the “ق“ is not read in bold, it will be pronounced as “کلب” which means “Dog”. Due to such ignorance, the reader makes a big mistake.
There are some words which are read by stretching and if they are not stretched then the meanings of the words change. Similarly some words should not be stretched and if they are stretched then the meaning of the words will change.

As the Arabic word is “قال“; it means “He said”. If the letter “ل“ is read by stretching , it will become “قالا“ and then its meaning will be “They both said”  Due to such ignorance, the reader makes a big mistake.
There are many other similar mistakes that the reader of the Quran makes due to ignorance. Therefore, it is necessary to learn it from an expert teacher.
Similarly, there are some rules that if they are not taken care of, the beauty of the recitation will not remain and the listener will not understand the words correctly.

The true right of recitation of the Quran is that the Quran should be recited slowly keeping in mind the rules so that the reader of the Qur’an can enjoy and get all the blessings and virtues of reciting the Quran.

Here are some basic rules of Tajweed!

٭How to pronounce the letters with different movements.

٭ How to read specific letters with specific movements.

For a long time now, our organization has been offering its services internationally to popularize the teaching of the Quran. Hundreds of students have so far graduated from our institution after taking various courses related to the Quran.

About 4,000 students are currently affiliated with our institution

Our organization provides Quran and Islamic teachings to the people in an easy, convenient and modern way  without any sect discrimination through modern technology.
Our institution has the services of teachers who specialize in the Qur’an and Quranic sciences and have experience in teaching students of all ages. And have been associated with our organization for a long time.

Arabic whoever intends to learn the Quran or the knowledge related to the Quran, our institution would provide all kinds of services and suitable environment in fulfilling its goals.

Our course begins with the first step for generating great user experiences: understanding what people do, think, say, and feel. In this module, you’ll learn how to keep an open mind while learning.

Total numbers of students in course